This was the moment I’ve waited for, all my life…

I’ve been quiet since February as there’s not been a great deal to write about. When the weather allowed, I’ve been with my instructor doing endless rounds of circuits around the airfield. Power up, take off , fly in a circuit and land. Over and over again (71 times to be precise). Due to my instructors licencing conditions, he was not allowed to sign me off to go solo, which was around the 55 circuit mark, and as such, I had to be evaluated by a different instructor. The first time it hapenned I failed as I think the nerves got the better of me. But after a few more laps of the track and second time round. I got to go on my own.

It all started out just like any other lesson. I met with the new instructor and we did a bit of general chit chat. It was a scorching hot day with almost no wind. We climbed on board, went through the checks, fired up the engine and taxied down the runway. Everything was going fine and we were just about to line up for take off, when a Deer sprang out from no-where and ran across the runway! 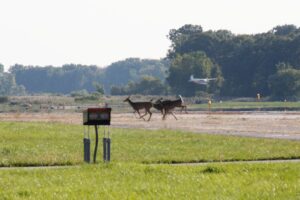 A few moments later, we’re up in the air again and I’m doing more circuits. Throughout the lesson my evaluator was asking various questions such as, if the runway is blocked and you have to divert, where do you go? Or, if you’re flying along and you see smoke in the cockpit, what do you do?

After about the fourth take off, as we were climbing, he quickly shut down the engine to idle speed and said, “engine failure after take off”, otherwise known as an EFATO. I have to admit, this did catch me slightly off guard, which was the whole point of the exercise. But thankfully, my training instantly kicked in and I dipped the nose forward to keep up the airspeed and look for a suitable place to land. Emergency over and “touch drill” completed (where you simulate turning off the various switches), we throttled up to the max and turned out of the dive. 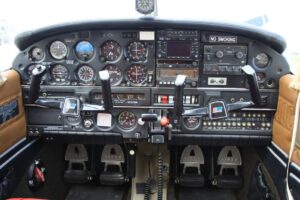 The lesson was going well, but after six laps and a second EFATO, I was beginning to think to myself that going solo wasn’t going to happen that day. Perhaps I did something wrong. Perhaps there was something about the conditions for a newbie, or maybe we were just simply running out of time. Either way, I was on my final approach to the runway and called in to the tower intending to do another touch and go as previously done throughout the lesson.

The landing hapenned and I was just about to power up again when the instructor quickly intervened and took control. He pressed hard on the brakes and we came to a quicker than normal stop. My head is now wondering what on earth is going on? Why did he take over and slow so quickly? We vacated the runway and stopped, where he then casually turned round to me and said, “ok, she’s all yours, enjoy your flight”.

After a brief discussion and a couple of pointers to look out for, he stepped outside of the aircraft and I was all on my own. This was the first time I’ve been in the cockpit with the engine running and it felt strange. I taxi to the end of the runway, go through the checks and wait for two other planes in the circuit to land. They clear, and now it’s my turn. As I line up, I try not to think about anything else other than my training. The runway is laid out in front of me and I take the briefest of moments to gather my composure. The throttle is increased, I release the brakes and my lifetime’s ambition is turning into a reality.

Before I know it, the circuit is done. Nearly ten minutes have passed and as I bring the aircraft in to land, I feel an enormous sense of achievement. Despite having six months of cancellations due to bad weather conditions, today was perfect; and I’ve gone from being a competition winner, to a pilot in just 5 months. 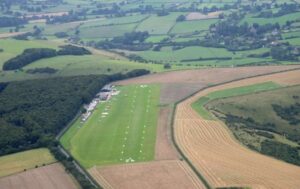 The course is not yet complete, as I still have 8 more exams and additional training, which includes cross country solo flights and navigation exercises, before I can then become a licenced pilot. But right now, I can happily say that I can take off, fly and land a plane safely, without having an instructor by my side. And it’s all down the fantastic team at Abbasair, who, without their patience, help and professional guidance I would not be able to write this blog.

If you want to experience a pleasure flight, have a lesson, or just chill out with some coffee and cake overlooking the runway; then take a look at all of the features listed at https://comptonabbasairfield.co.uk/ They’re open every day, except Monday’s.

Finally, I’d like to offer my sincerest thanks to them for everything they’ve done for me. It is truly appreciated.

Before the global pandemic began, I’d spent 38 years as a specialist technician within the world of Theatre, Film and TV. So, I have to say, it didn’t come as a massive surprise when my instructor said to me earlier today, I have to be a little less heavy handed! He was of course referring to using the controls. In […]

8 months ago, when I started on this journey, I didn’t have a clue about how to fly an aircraft. All the knobs, whistles and bells that were laid out in front of me in the cockpit, seemed to provide as much of a clue as hieroglyphics written in stone. However, after 16 hours tuition with 11 take off’s, 4 […]