When I was just seventeen years old, I took my first ever pleasure flight from Bournemouth airport. We flew over the Purbeck hills, across Poole Bay, over Brownsea Island and of course, Bournemouth it’self. I can remember clearly in the pre-flight briefing the pilot said he would be happy to do one or two aerobatics if time allowed. To which I replied, hell yeah!

Well time did allow us to have some fun, and he was more than happy to show me a couple of loops, barrel rolls and even a stall turn. And while I loved every bit of it, it was the latter which turned my stomach and showed the whites of my eyes, as we turned from fun to fear in the case of a split second! As we headed on a near vertical climb over the countryside, he reduced the throttle, adjusted the rudder and the natural weight of the engine, plus gravity took over. In a case of split timing, we flipped over and had the ground come hurtling towards us. With the stall indicator warning ringing in our ears, we rotated round to one side, and he brought us out into a controlled glide, followed by a powered climb and back to level flight. It was definitely a “change your pants” moment.

That 60 seconds in my life has remained with me for over three decades. I’ve never forgotten the feeling as we faced the ground and saw the world rotate beneath us. So, it isn’t any real surprise that I’ve been dreading my most recent lesson… Slow flight and stalls.

My instructor was aware of this as I chatted to him about it a few weeks ago. He could see that it’s something I wasn’t looking forward to, and whilst he spoke about the lesson and how to work through an aerodynamic stall, I knew I had to just face up to things and get on with it!

It was the first flight of 2022. The recent bad weather had made the centre line of the runway slightly muddy, so everyone was asked to stick to the far outsides. As we taxied along going through the various checks, I could see marks in the grass left by other aircraft, which left very useful, albeit unintended guide markers as to which was the best route to follow.

We lined up at the end of the runway and before you know it, we’re airborne once more. It was a beautiful and clear crisp winters day. I hadn’t flown for several week’s so, after a minor imbalance shortly after take-off, we headed northwest and climbed away from the airfield.

Despite the fears and concerns I had, my instructor took me through the process in a calm and professional manner. We went to over 4000ft where he demonstrated slow flight and how height is lost with various procedures. As you reduce the throttle and slowly raise the nose by pulling back on the control column, the air passing over the wings becomes more unsettled. First you hear the stall indicator warning, followed by a shaking of the aircraft. At this point, you then push the control column forward in a smooth yet firm movement, and let the airspeed build up once more. The plane stops rattling, the warning goes out and you power up once more. 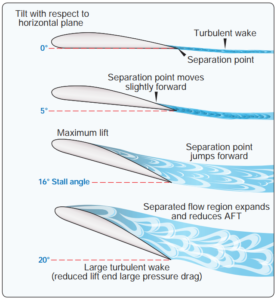 Then it was my turn…

As I took control, I reduced the throttle, raised the nose and heard the warning. A couple of seconds later the plane started to vibrate but my instructor wanted more. “Pull back, pull back” he said. “Keep coming… more… more”! The more I pulled back on the column the vibrations increased, my biceps started to bulge as the force through the column grew and yet he wanted me to keep going. It felt like utter madness until eventually he instructed me to push forward. This I did and the plane flipped from a climb to a descent. However, I felt as though I’d now gone too far the other way, so pulled back again. The indicator sounded once more so I pushed. As we flipped from climb to descent over and over my instructor had to take charge.

Following on from this, we saw that 200 feet had been lost, so climbed back up again to regain height and stay safe. He got me to repeat the exercise, and whilst not perfect, I did manage some improvement.

After this, I was shown how to sideslip the aircraft. This is a method used to reduce height in rapid descent whilst maintaining control and direction and is done by creating a combination of opposite rudder / aileron coordination. By creating a hard left on the rudder, and hard right on the aileron the air flow is decreased, and the plane will descend (you can also do it the other way round too). By keeping the two at exact opposites you maintain direction and can keep the aircraft under control.

Again, I was allowed to try this, and it all started well, until I was asked to “swap over” and everything went sideways – literally! Flying sometimes makes me feel like I’m back in primary school again, trying to learn my left from my right. What should be easy, isn’t always the case – especially when it comes to coordination. And unfortunately, in this case, I put my foot hard on the rudder before adjusting the aileron and immediately felt the back-end kick round, sending us off in a 90-degree tangent! Not good!

Once more the lesson came to an end all too soon. After a brief discussion I left and headed home, eagerly looking forward to next week. This is an incredible course, and I really can’t recommend it highly enough. The staff at Abbasair are an amazing team and do a fantastic job as they run the airfield, flying school and café. They’re fully Covid compliant and have put every measure they can to keep everyone safe. To find out more about their services, you can view their website here.

Well, I’m now three lessons in and slowly getting to grips with some of the controls. At home I’ve printed out eight sheets of A4 paper and stuck them together on my office wall, to make one large image of the cockpit. I’ve also done the same with the outside of the aircraft, so I can familiarise myself with the […]

8 months ago, when I started on this journey, I didn’t have a clue about how to fly an aircraft. All the knobs, whistles and bells that were laid out in front of me in the cockpit, seemed to provide as much of a clue as hieroglyphics written in stone. However, after 16 hours tuition with 11 take off’s, 4 […]